Given a music, the algorithm finds few notes and their scores that generate the closest approximation to the original music.

This is an algorithm that detects faces in an image. It finds the Eigen image from a set of images and differentiates face and non-face for a given image using Adaboost classifier. The developed algorithm can detect faces with different sizes in multi-face images.

Two algorithms are developed to compare their performances of segregate scattered points into different clusters: one is k-means, which cluster data points based on Euclidian distance from center points, and the other is spectral clustering, which is based on principal subspace in high dimensional kernel space. 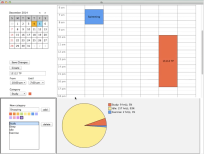 /productive manager was developed as a course project for Introduction to programming (15-112). Python’s GUI package TkInter is used to develop this program, and it is based on object oriented programming. Detailed functions are explained in this video clip: https://youtu.be/hLPfpICo57c

A sensor-based game is developed as a team project for Data Acquisition class. In this game, a player moves a cart on a rail responding to on-screen instructions. Light intensity sensors and accelerometer are implemented to score the player’s movement. A LabVIEW program was made and integrated with the hardware. This project won the “Best Project (by popular vote)” awarded from a class size of more than 50 students. Video clip:  https://youtu.be/gDVN-0402e0